If you have an iPod, and are worried about getting it stolen, this could be the ultimate in protection.

Harry Potter arrived in our house around 10am on Saturday, and by 6pm Sunday my better half had finished it. Now I know what you’re thinking, and it’s true; that is a long time. We had to go to my father’s for a birthday party, which really cut into her available time. The verdict? It’s good, apart from a bit near the end that she didn’t really get, so she’s going to read it again.

This is so odd I can’t actually tell if it’s good. But the second half has Ninjas!

Here’s an excellent Flickr gallery showing the results of HDR (High Density Range) photography. HDR photos are amalgams of several (usually three) pictures of the same subject, but shot with different exposure settings. Typically one normally exposed image captures the mid tones, an underexposed one captures the highlights, while a third overexposed one gets the shadow regions. Combining them allows you to see details across the entire range of brightness of the image, something that cameras (and indeed human eyes) can’t do in a single view normally. 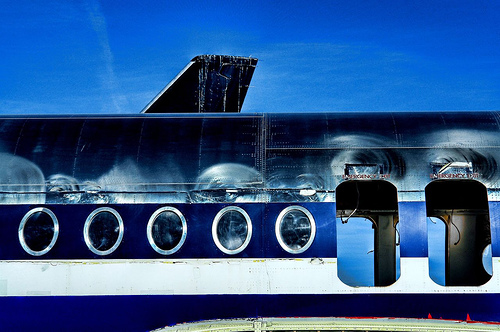 The process gives the images an unnatural look – obviously, it is unnatural – but it’s very appealing.

The government wants to improve the health of its citizens, reduce congestion and pollution, and not impose burdensome taxes. You’ll notice I haven’t yet said which country I’m talking about, and yet it’s true isn’t it? Those things are so self-evidently what a government would want to do that it’s true of just about any country; the arguments would be on how to do it, what counts as burdensome, etc.

Every bicycle imported into the UK (there, I gave away what country I’m talking about) has a 14% import duty applied. This isn’t a protectionist measure, because we don’t have a domestic bike industry of any size. What’s left of the glory days is a number of specialist frame builders who are in competition with each other, but not with imported bikes built in bulk. It isn’t a general revenue raising measure, because any number of items have little or no duty applied; in duty terms, for example, it’s cheaper to play Pro Cycling Manager (0%) on your PSP (2.2%) than to actually go cycling (the aforementioned 14%). What it is, is that most pernicious of government actions – a tax that once served a purpose (back when we had a domestic bike industry) but now serves as an unnoticed source of revenue and creator of admin jobs.

Well no more, I cry lustily, no more! I’ve taken the ultimate step that every brave citizen in a democracy must do when pushed to breaking point – I’ve signed an official online petition complaining about the situation. What happens with these petitions, briefly, is that the petition eventually closes, a flunky for the PM’s office tosses off a dismissive response thanking us for our input and explaining that as a result of our feedback nothing is going to change, and we work on our flexibility to make sure we can reach our ankles with both hands.

In this case, though, I’m really curious about what that response will be. This tax (‘duty’ is a weasel-word) actively harms the government’s stated aims, in all the areas I mentioned above, and is demonstrably unfair to boot. So what could be the defense? I’m guessing something along the lines of “part of a complex network of revenue streams, can’t pick on one aspect in isolation, upcoming review of import costs, European constraints, thanks for your comment”.